Back in August, I attended the 2019 Byron Writers’ Festival and was blown away by the quality, quantity and diversity of the speakers. From Peter Greste to Tim Flannery to Jess Hill, I was in awe of their confidence and conviction. The weather was beautiful (of course) and the silk scarves billowing in the sunshine along with the myriad marquees only added to my excitement. Jess Hill, who wrote the non-fiction book ‘See what you made me do’ which discusses coercive control and its link to domestic abuse, spoke to a packed crowd. Alongside her was former politician Natasha Stott Despoja, who founded ‘Our Watch’ and Rick Morton, whose memoir ‘One hundred years of dirt’ details the hardships of growing up in regional Australia. Having read Rosie Batty’s book ‘A mother’s story’, which celebrates her son’s life while highlighting relationship red flags, I was humbled by Jessica’s nuanced treatment of this complex and heartbreaking societal scourge.

I was also lucky enough to spend an hour listening to an interview between Dr Alice Gorman and the gregarious Adam Spencer on the topic of space archaeology! I learnt all about the ‘space junk’ that is currently orbiting Earth and the jeopardy it puts us all in, including those inhabiting the International Space Station. I also discovered that Honeysuckle Creek Tracking Station near Canberra was instrumental in relaying the first televised footage of Neil Armstrong walking on the moon. Parkes Observatory was also involved, but the little-known Honeysuckle Creek played a pivotal role.

In addition, I got to hear from my childhood hero, Professor Tim Flannery, who is a world-renowned biologist, famous for his research in mammalogy, palaeontology and more recently, climate change. His calm, respectful demeanour and creative approach to potentially ‘dry’ and ‘intimidating’ topics allowed audience members to join in the discussion, whether they had a science background or not. I received his book ‘The future eaters’ when I was seventeen and continue to share his passion for and love of Australian flora and fauna.

All in all, it was a wonderful two days and I highly recommend it to anyone who is thinking of doing something ‘a little bit different’ and looking for some food for thought. It was extremely well-organised and had excellent food (although I brought my own), facilities and ample parking.

As a tribute to the Northern Rivers Region, I’m attaching a poem I wrote about Lake Ainsworth, which is just opposite Lennox Head Beach, NSW. 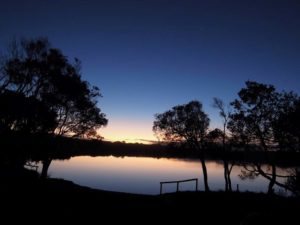 Twinkling mirror of the sky,
A watercolour dream.
Colours gently melded by
A waning beacon’s beams.

The stillness of the sleepy lake,
Svelte silhouette of trees.
Upon a bench I watch with awe,
Warm blanket at my knees.

The fiery glow of umber light,
The vast expanse of blue.
Bold planets glimmer in the night
As vibrant hues subdue.

Mosquitoes nibble at my skin,
I wave my arms about.
Bright laughter tumbles liquidly,
Such frenzy do they flout!

I stake my claim upon this place,
This hallowed point in time.
We course through space so rapidly,
It etched into my mind.